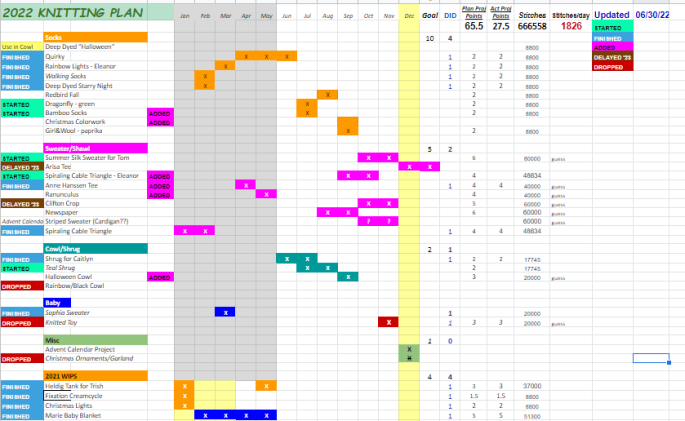 Wow, was I lucky!!! Seems I left my sock project bag at the Panera where my new knitting group met last week. It wasn’t until Monday when I went to work on them that I realized I’d left them. Fortunately a worker found the bag and stowed it under the cash register. Only knitters know that was about $50+ in yarn, needles, and bag. Didn’t get as far on them as I had hoped. Fingers crossed I’ll get them finished this week.

OOPS I DID IT AGAIN

You would think I would know by now it rip back if something isn’t quite right. I tried to cheat on my baby blanket when I ran out of yarn for on a stripe. Thought I could live with it. After 2 failed attempts to “fix it”, I ripped about 12 rows back. Then of course when I knit the second time I must have knit looser as I ran out of a different color’s yarn. Now each wider stripe gets one row of white before the fuzzy white stripe. It’s a “design element”. I’ve realized that I cast-on more stitches than I desired but it’s okay. The stripes will be vertical instead of the more typical horizontal. 37″ seems a bit wide but is perfect for the length I wanted.

My next project will be a Halloween cowl. Hoping it gets cool enough in October to wear it. Too often I don’t even get to wear my Halloween sweater because it’s still too hot. But I wanted a fun colorwork project. I will not be knitting the orange/white/pink stripes. Instead I’m using a sparkle black and orange variegated sock yarn for those sections. I frogged the yarn from a pair of argyle socks I started a couple of years ago hoping to master intarsia in the round. Not. The sock yarn was black, orange, bright blue and yellow. They will be great for the colorwork section. (I do have some white for the ghosts.)

A final photo of my finished Ranunculus. Turns out I don’t have to wear a top underneath. I’m very happy with the neck of this pattern versus the typical “boat neck”. I will be using this neck even on my Anne Hanssen and plan to knit again. I will also do some sleeve decreases to make a more fitted cap sleeve.

The only acquisition this week was a V Neck Pattern, Broadview Pullover by KnitPicks, for my husband’s sweater. I had purchased a crew neck pattern but he said he’d prefer V Neck. I didn’t find many V Neck patterns on Ravelry so this is the one I ended up with.

Hope you have a wonderful week of crafting. This is a year of projects (YOP12) update. YOP is a Ravelry Group – make a plan for the year ahead for all your fiber activities, then update your blog each week. Plans can be calendar year (like mine) or mid-year start (like many). Following the plan is optional and creates some of the fun of posts.  YOP started it’s 12th year in July and I’m starting my third year in the group. I’ve been knitting for five years. 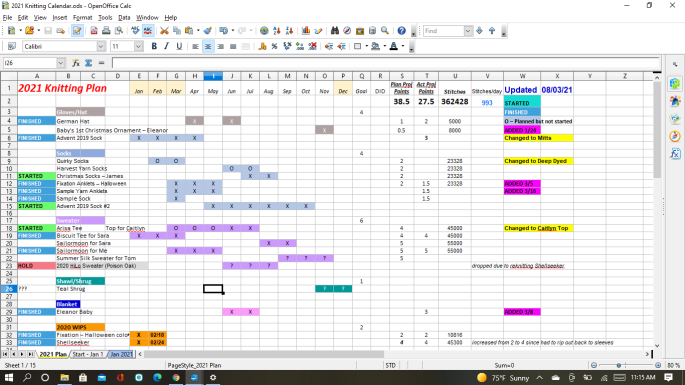 Thankful the light bulb finally went off before I went much further on my daughter’s Sailormoon sweater. I wasn’t sure she would like the hot pink speckles so I sent her a picture of the stripes. Indeed she admitted she probably wouldn’t wear the sweater a lot because of them. So I frogged her sweater and I’m restarting with some Madelinetosh Light in Cinnamon Dolce and Silver Lining that I had in my stash for a sweater for me. She loves the new colors.

I will use the blue and hot pink speckled yarn for a sweater for me. I’m really loving Joji Locatelli’s Newspaper brioche sweater. This will definitely be on my 2022 plan.

I’m in the home stretch on my Swirl E socks as I’ve completed the foot and heels and just have to do the legs. While I still want them to be short, I’ve learned I need to make the leg a bit longer if I want the stripes to show above my sneakers.

I want to have them done by Saturday so I can wear them to the Wool Festival and show them off to the vender that I bought the yarn from 2 years ago (Redbird Yarn Studio). She has been “missing in action” the past year due to “life stuff” so I’m thrilled that she did not give up on yarn making.

I love the row counters from Twice Sheared Sheep and I already have several (uhh 4 to be exact). I have wanted both a shorter counter for things like 4 row sock patterns and a counter set for flat work (one counter is only odd numbers – usually the pattern rows – and the other is only even numbers – usually the purl row). Dawn offered a sale last weekend so I finally bought them. I was so close to free shipping that adding the cute (honeycomb, carbon ring if you are a chemist like me) markers in essence only cost me $3. I love using those cheap 7 day pill holders for my knitting notions. This one only holds row counters. I have others to hold my multiple sizes and colors of 0-ring stitch markers.

The coming week is exciting. I will have yarn to share next week as I will attend the Wool Gathering festival next Saturday. I already have three venders that I’m committed to buying some skeins of yarn. I have too many sweater projects waiting for me to knit them so I’ll be buying fun sock yarns. I have plenty of people that will be happy with a sock gift as well as socks for me. I will also likely be buying a high end ball winder as I wasted an evening winding a ball on my cheap plastic one. I usually visit my friend that owns the expensive one but I thought “I only need to wind one ball to restart the Sailormoon sweater”. A whole evening spent just getting one ball wound!! Grrr. But it’s a lot of money to spend when my friend is only too happy to let me come over to wind yarn.

I hope you have an exciting week coming up as well.

This is a year of projects (YOP) update. YOP is a Ravelry Group – make a plan for the year ahead for all your fiber activities, then update your blog each week. Plans can be calendar year (like mine) or mid-year start (like many). Following the plan is optional and creates some of the fun of posts. YOP is in it’s 11th year. It’s my second in the group.